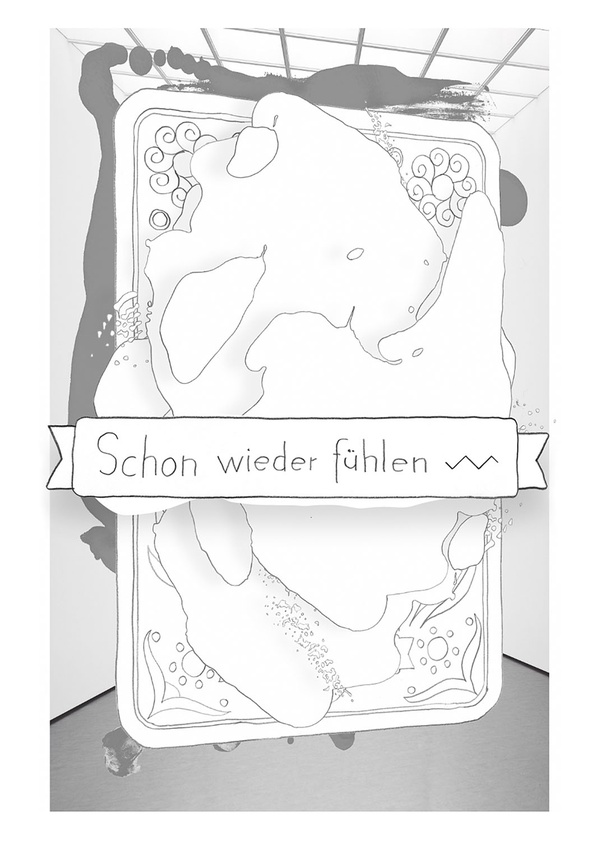 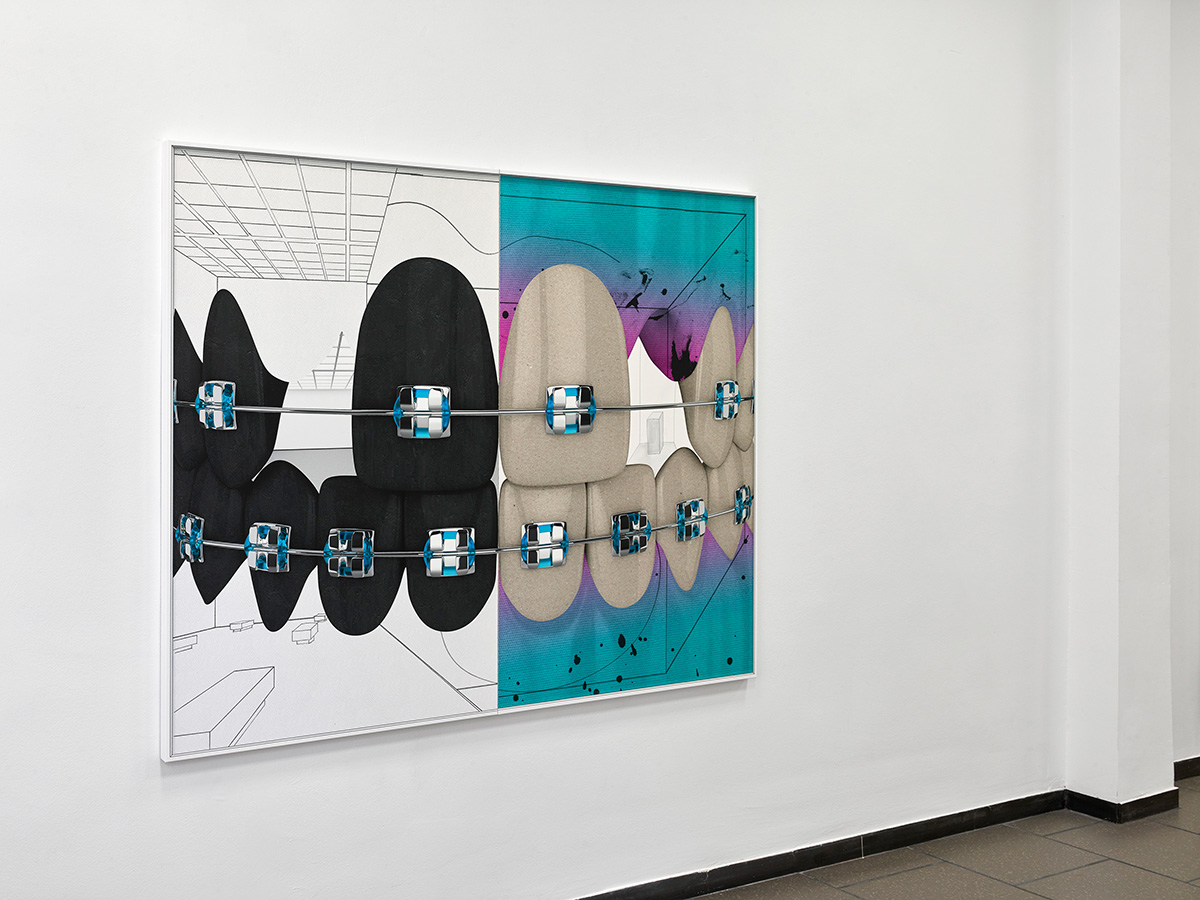 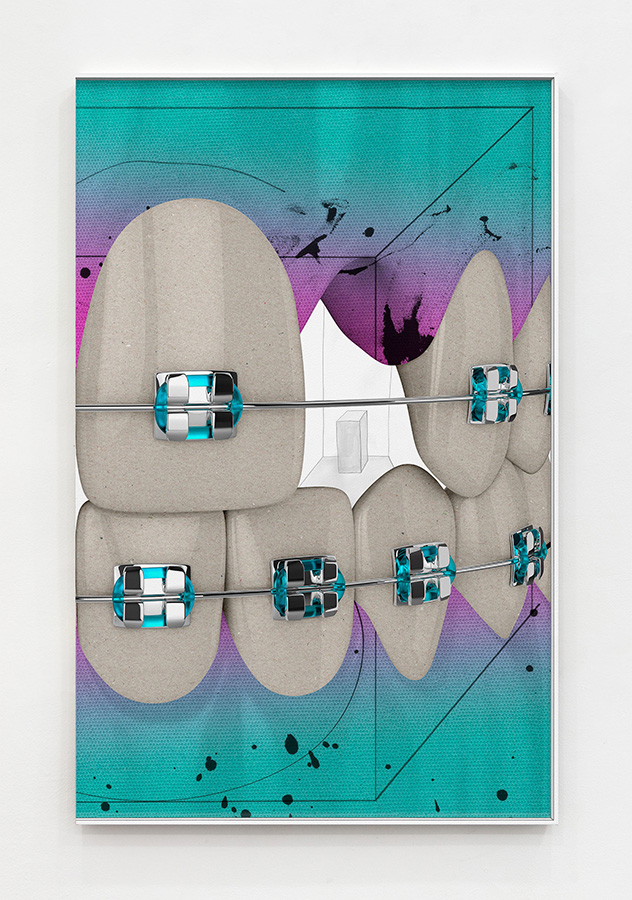 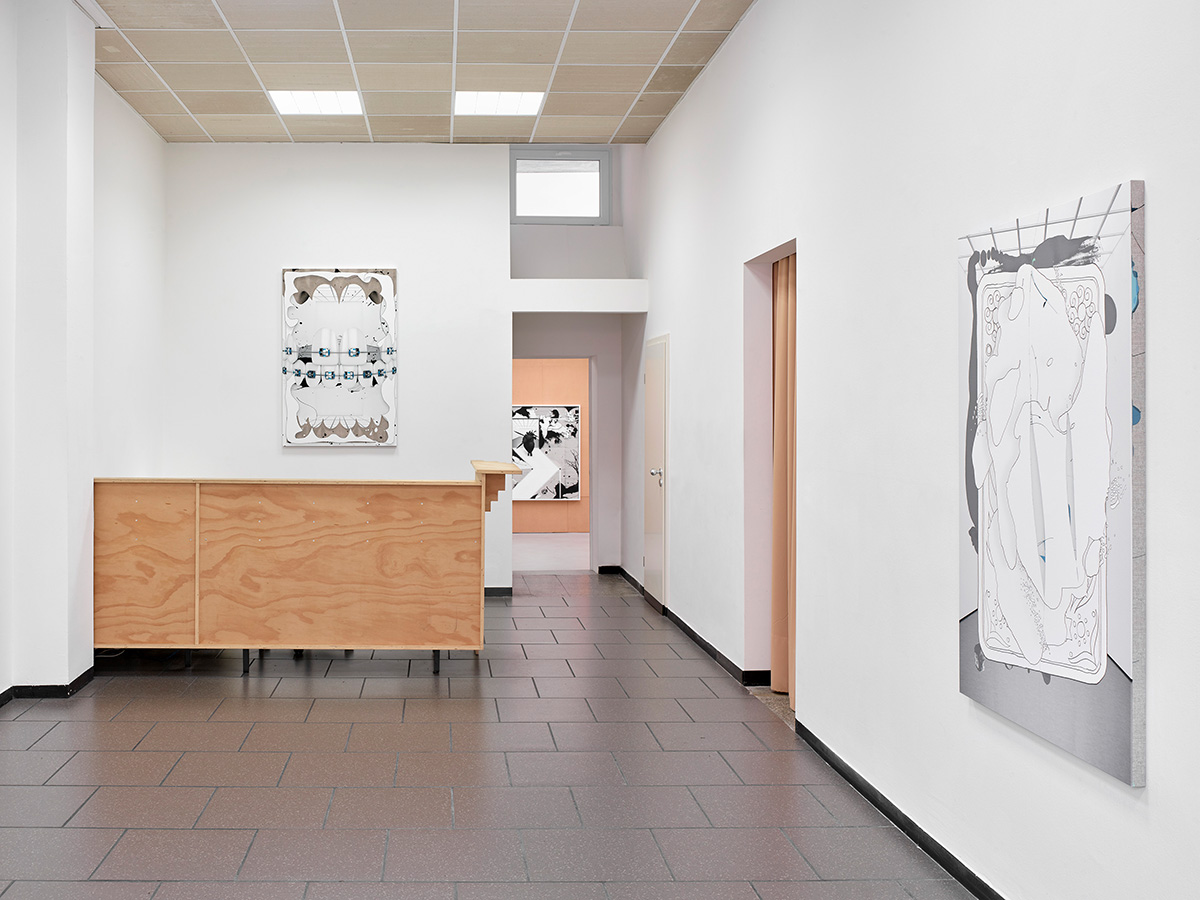 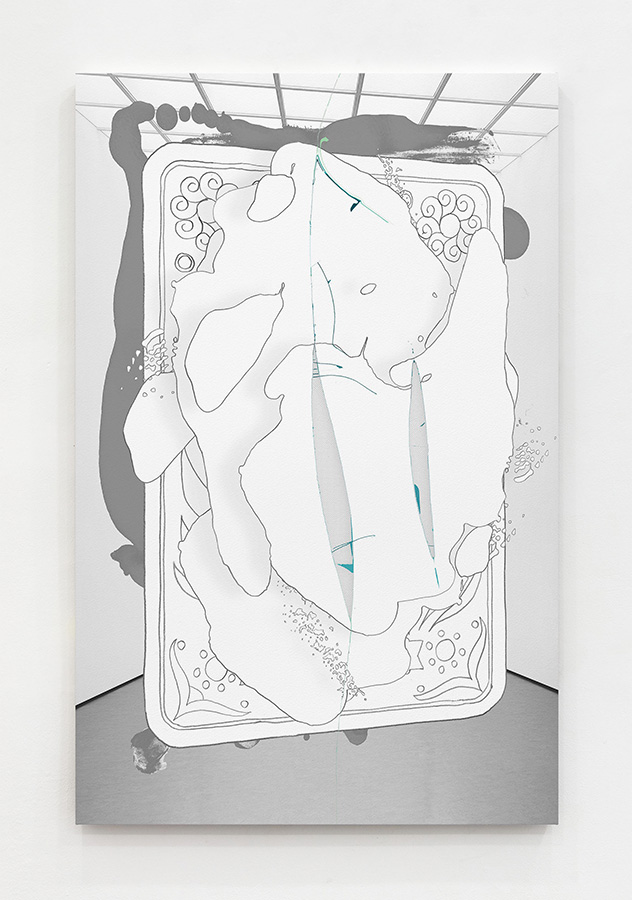 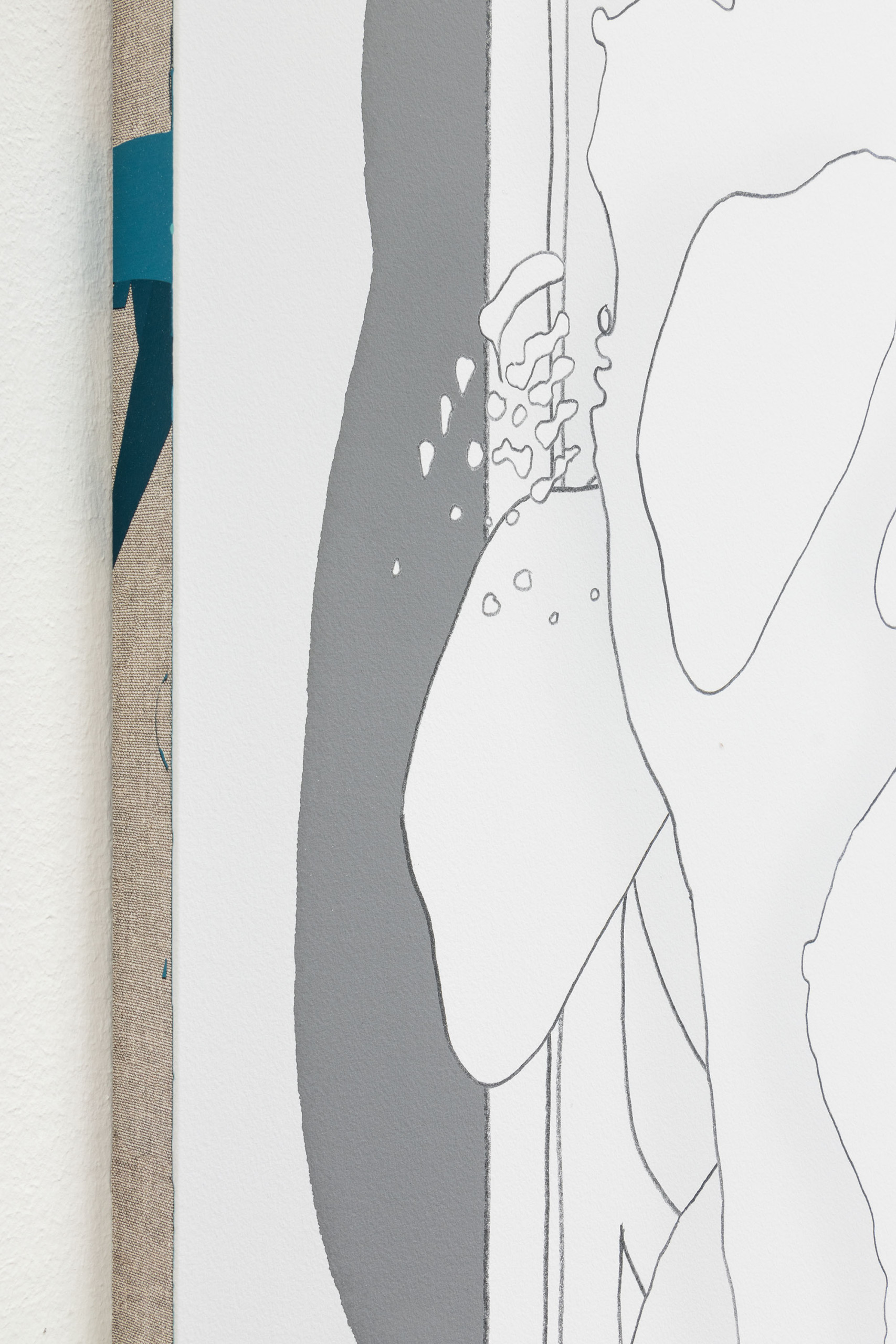 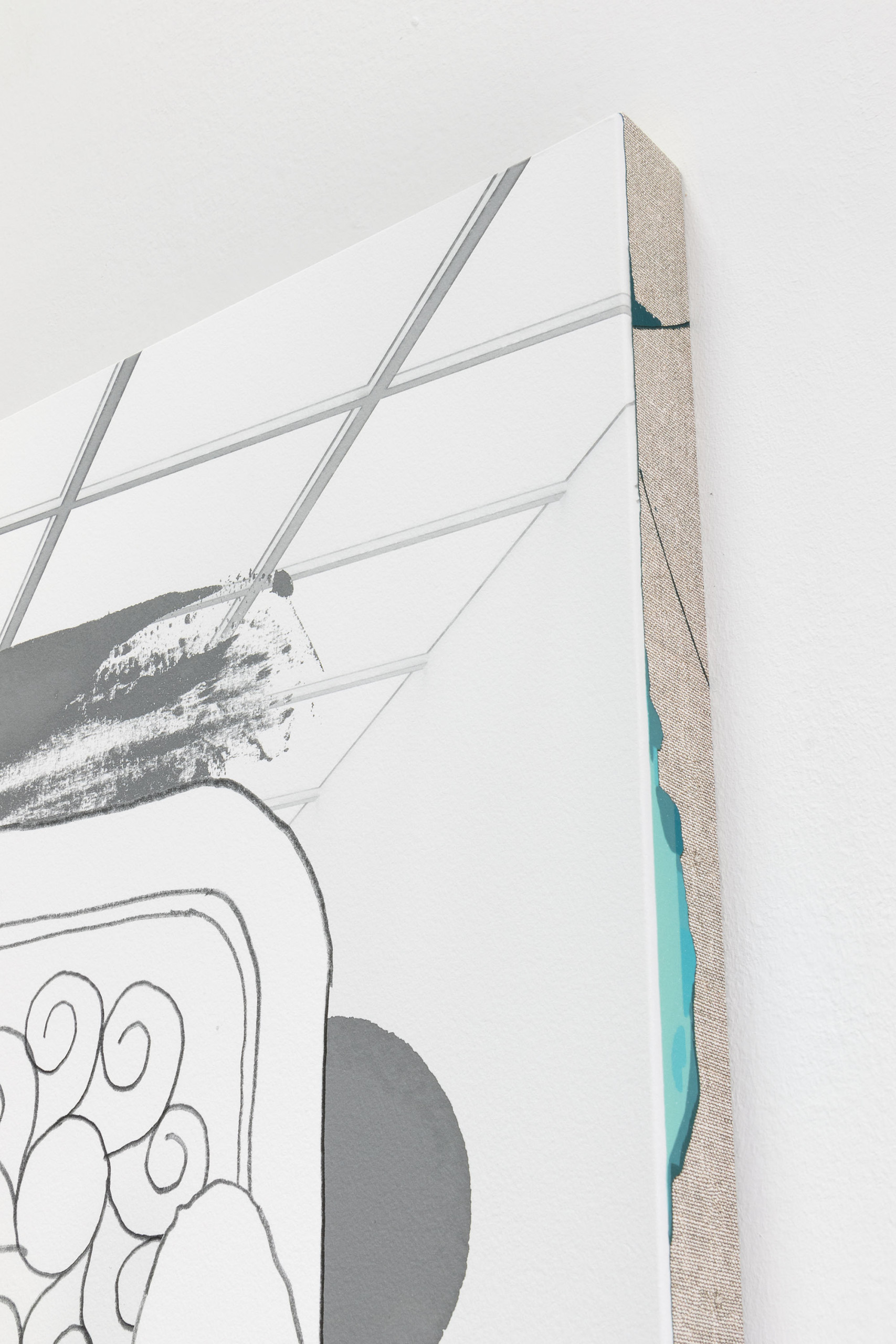 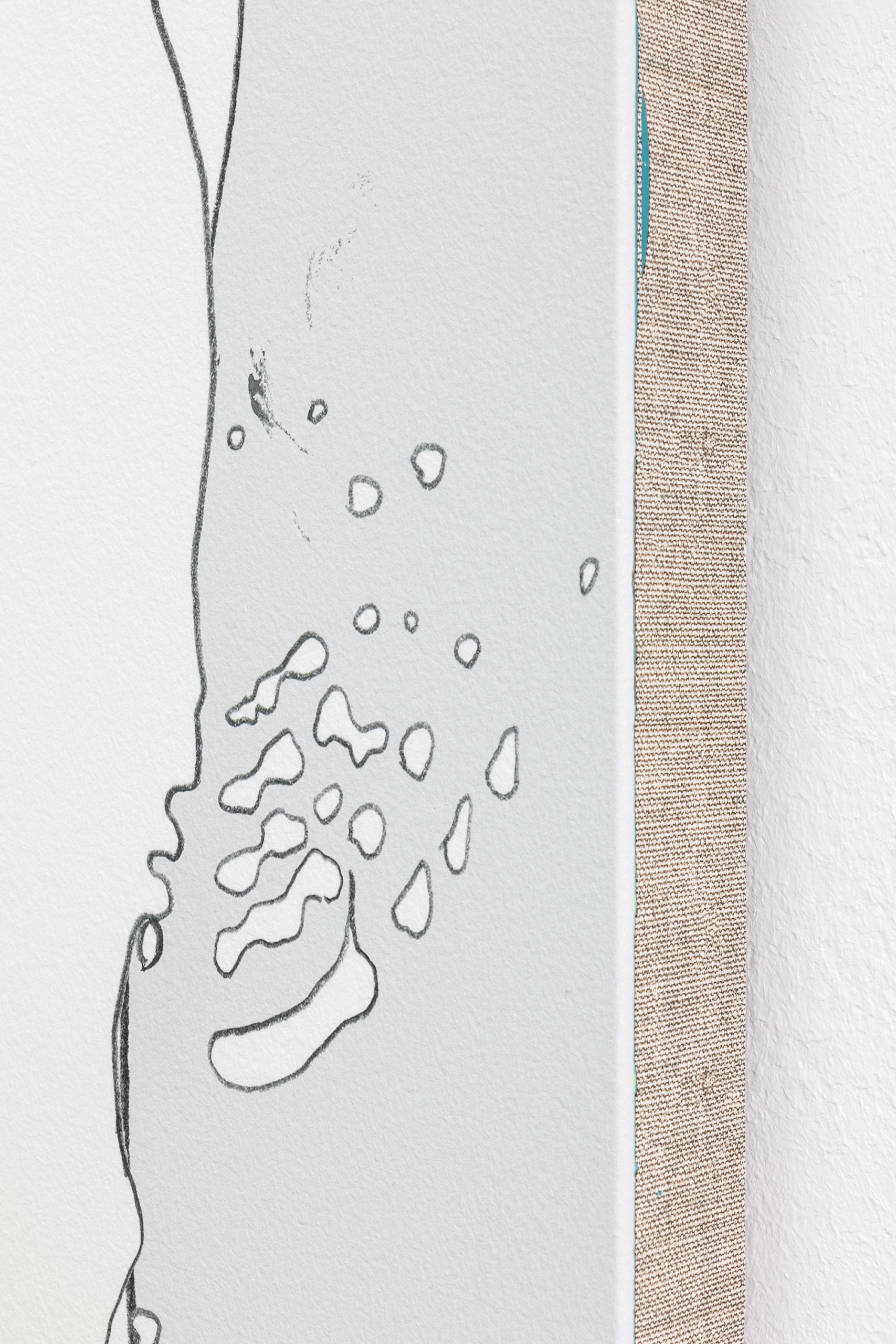 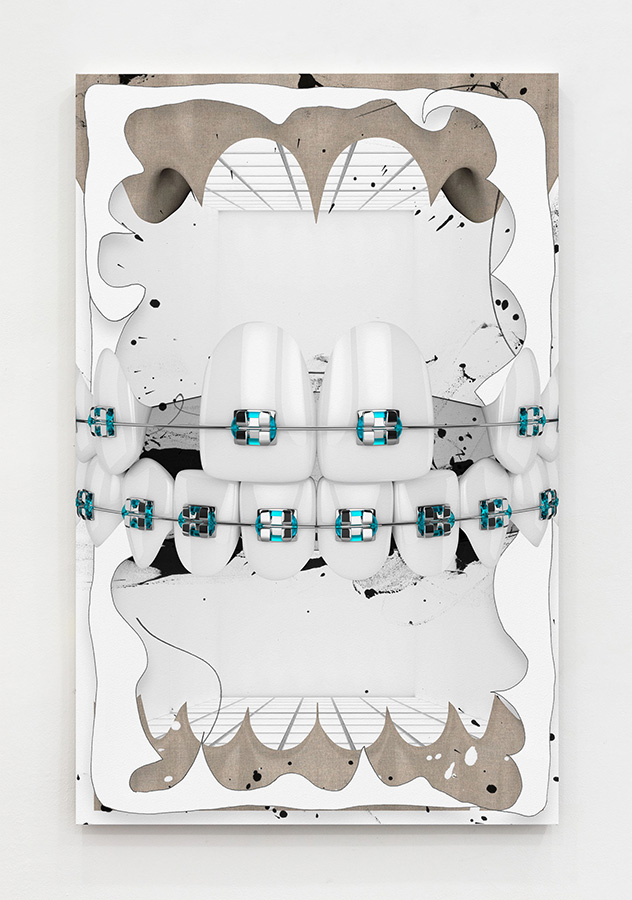 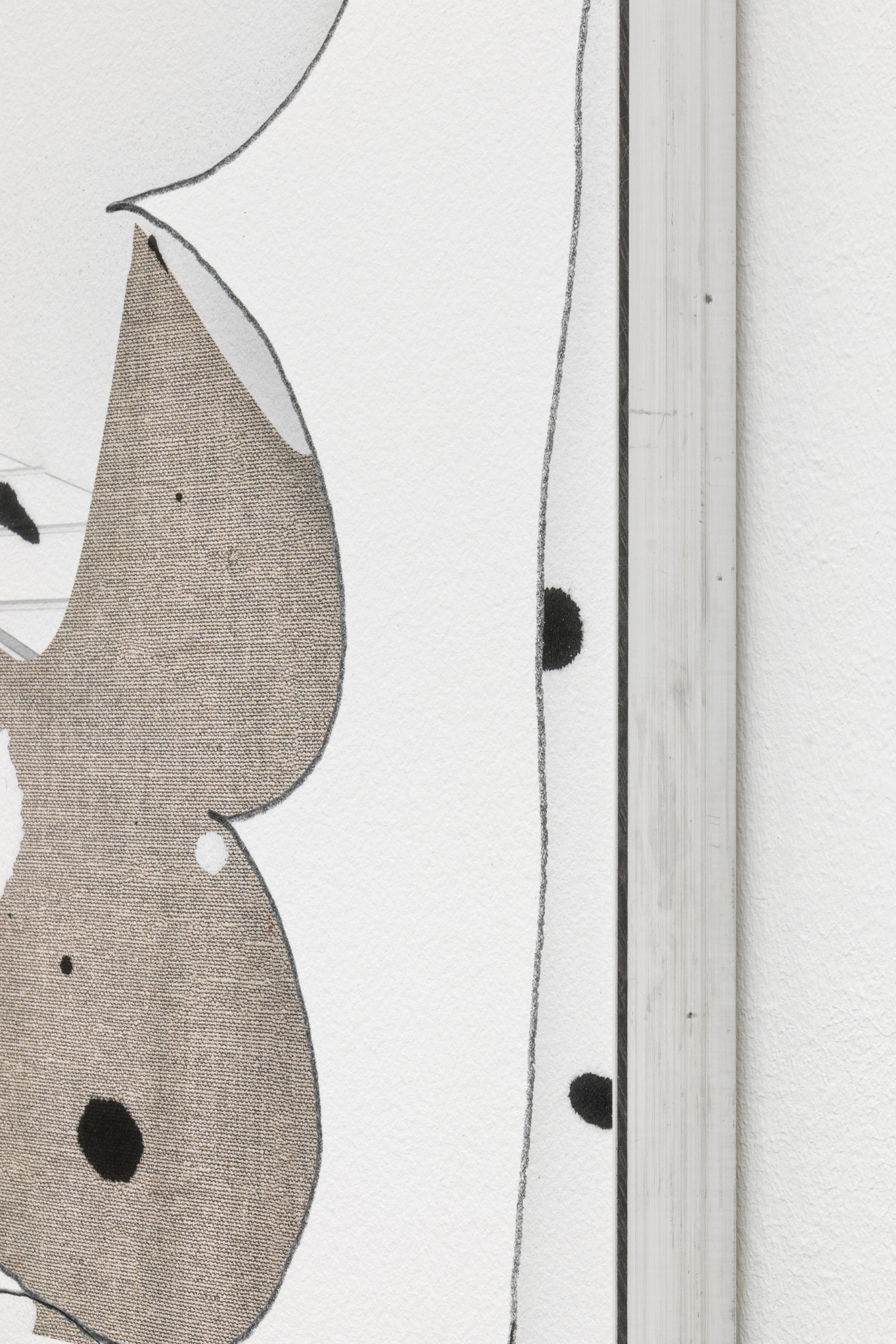 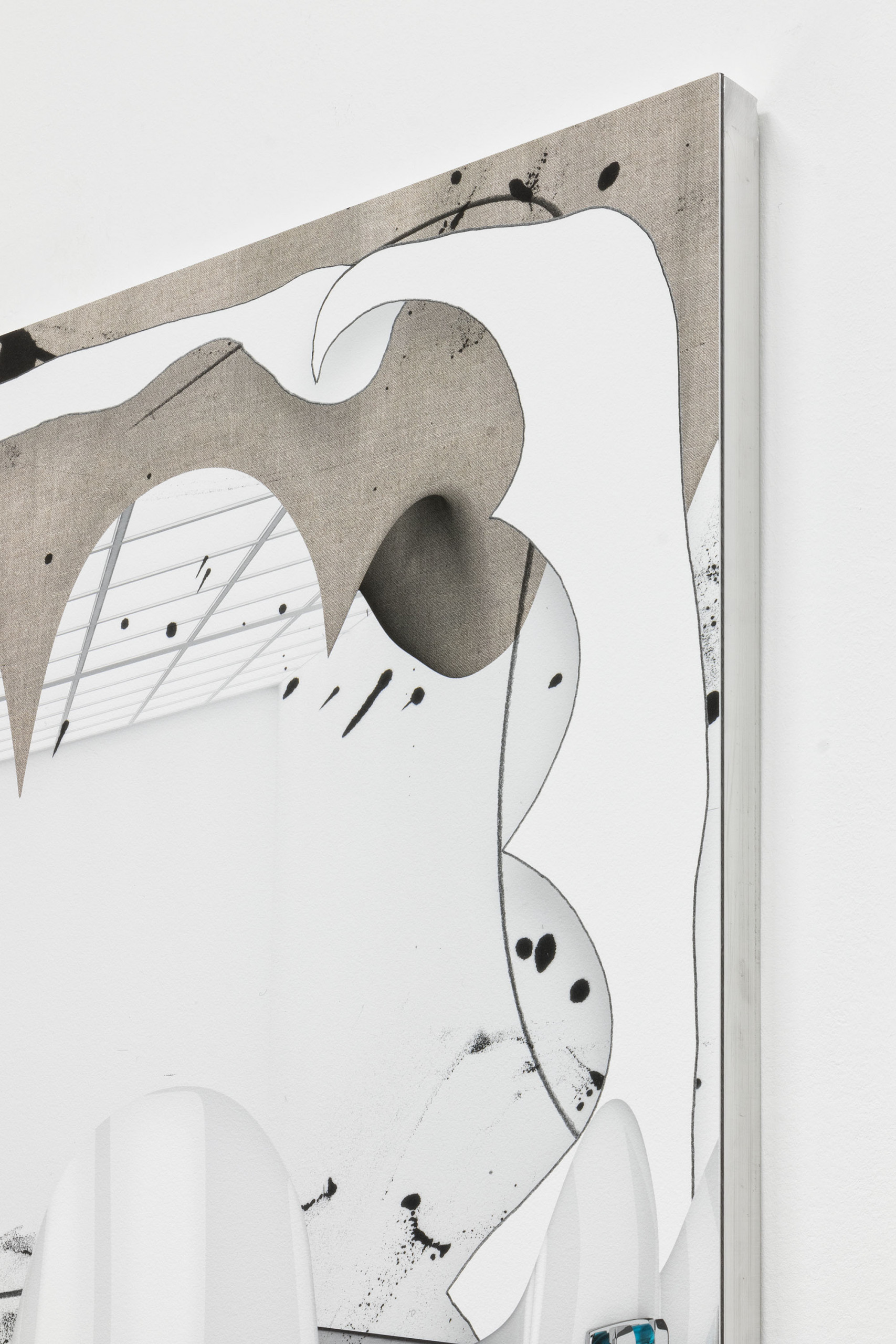 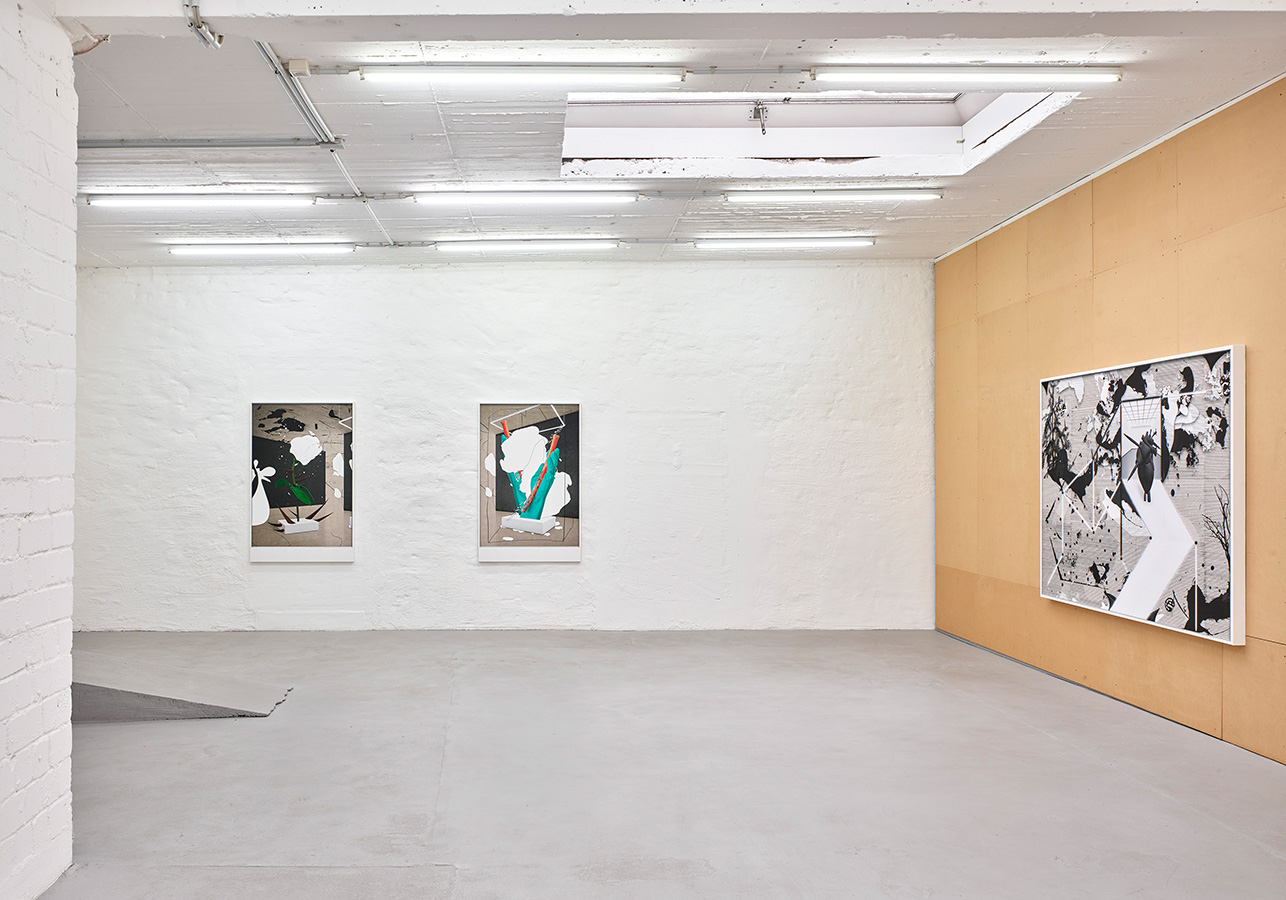 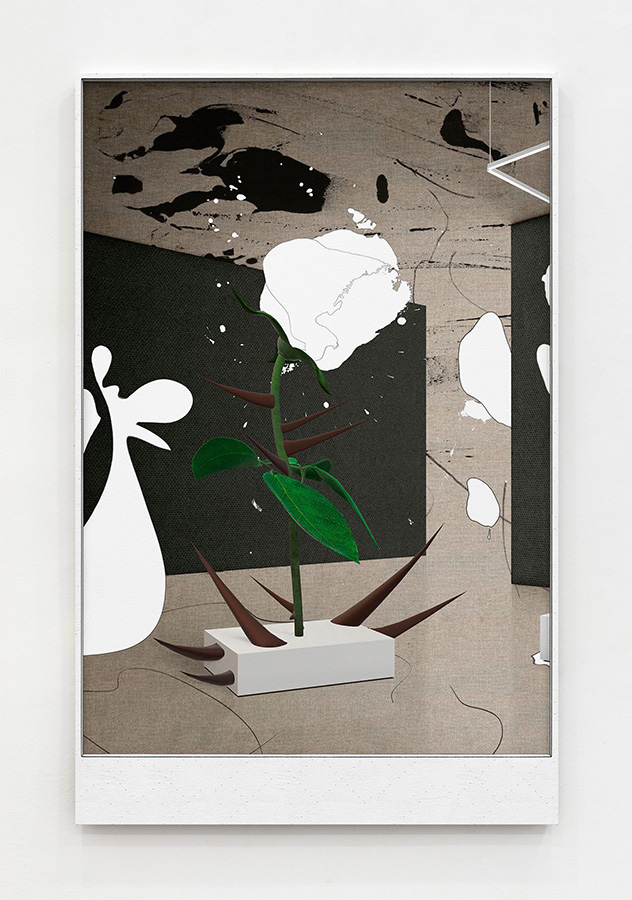 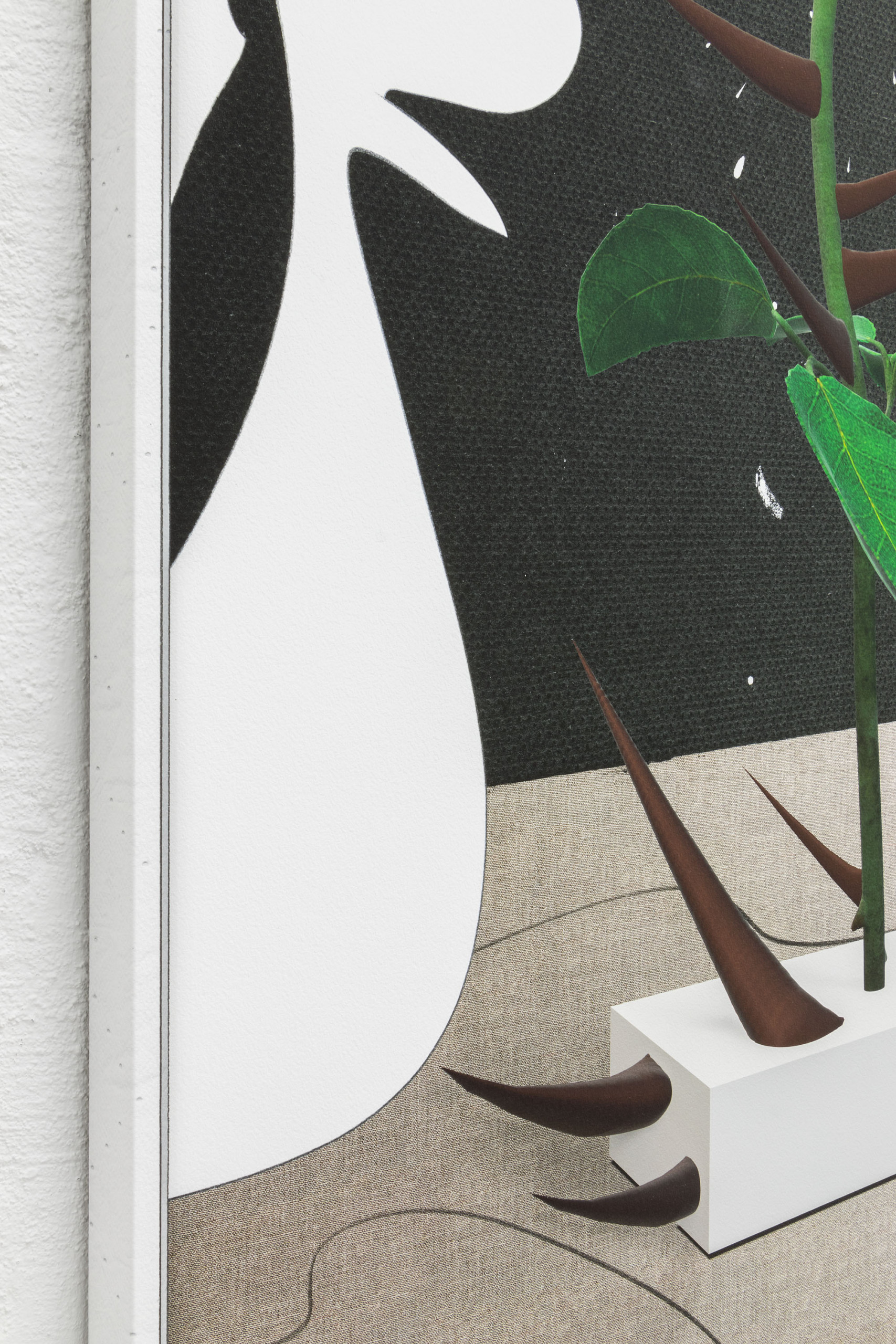 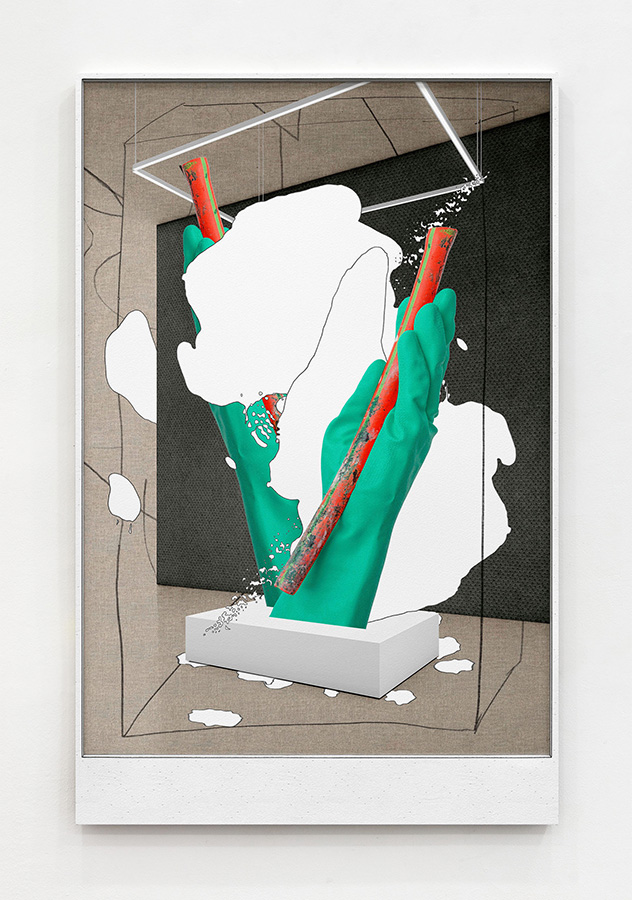 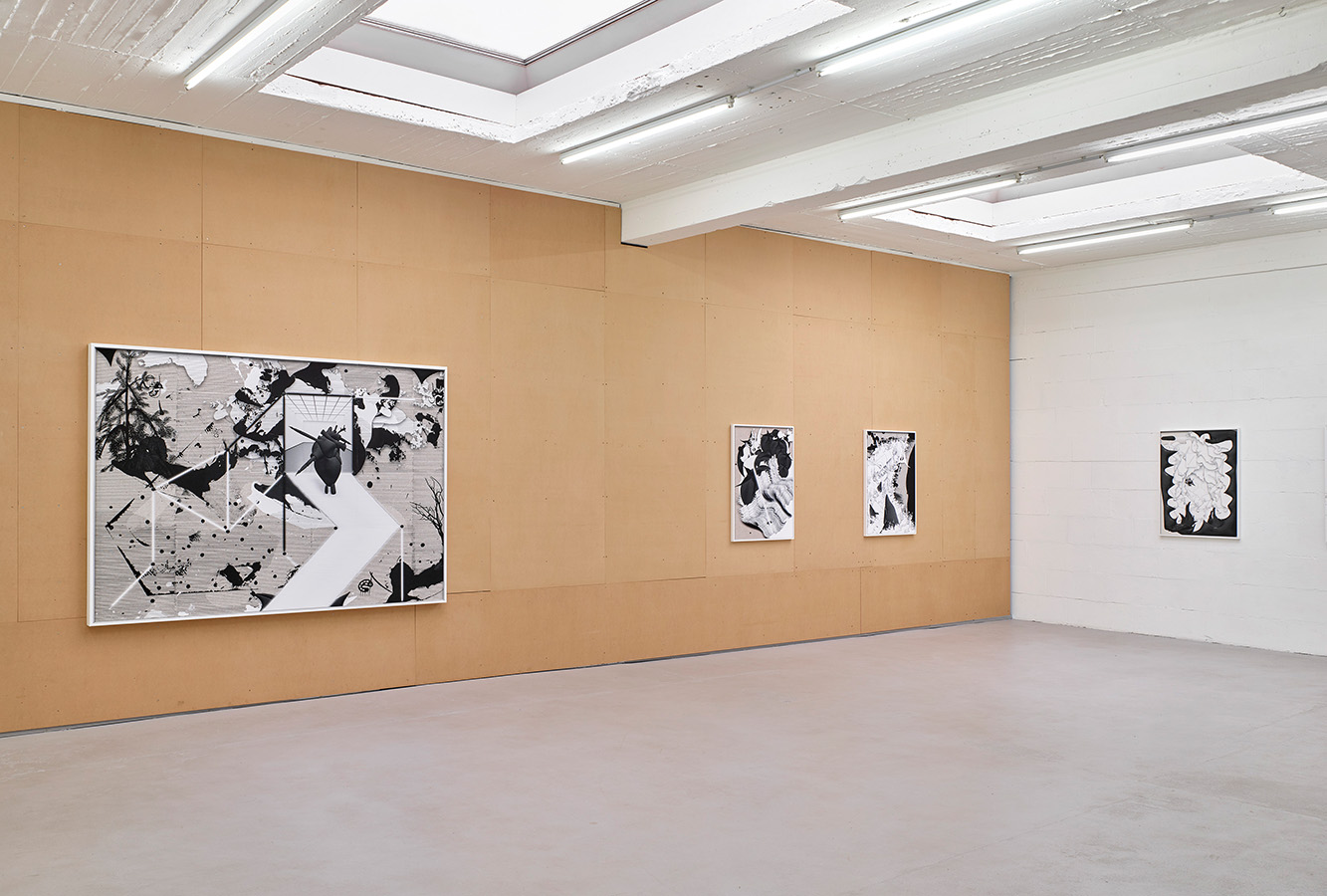 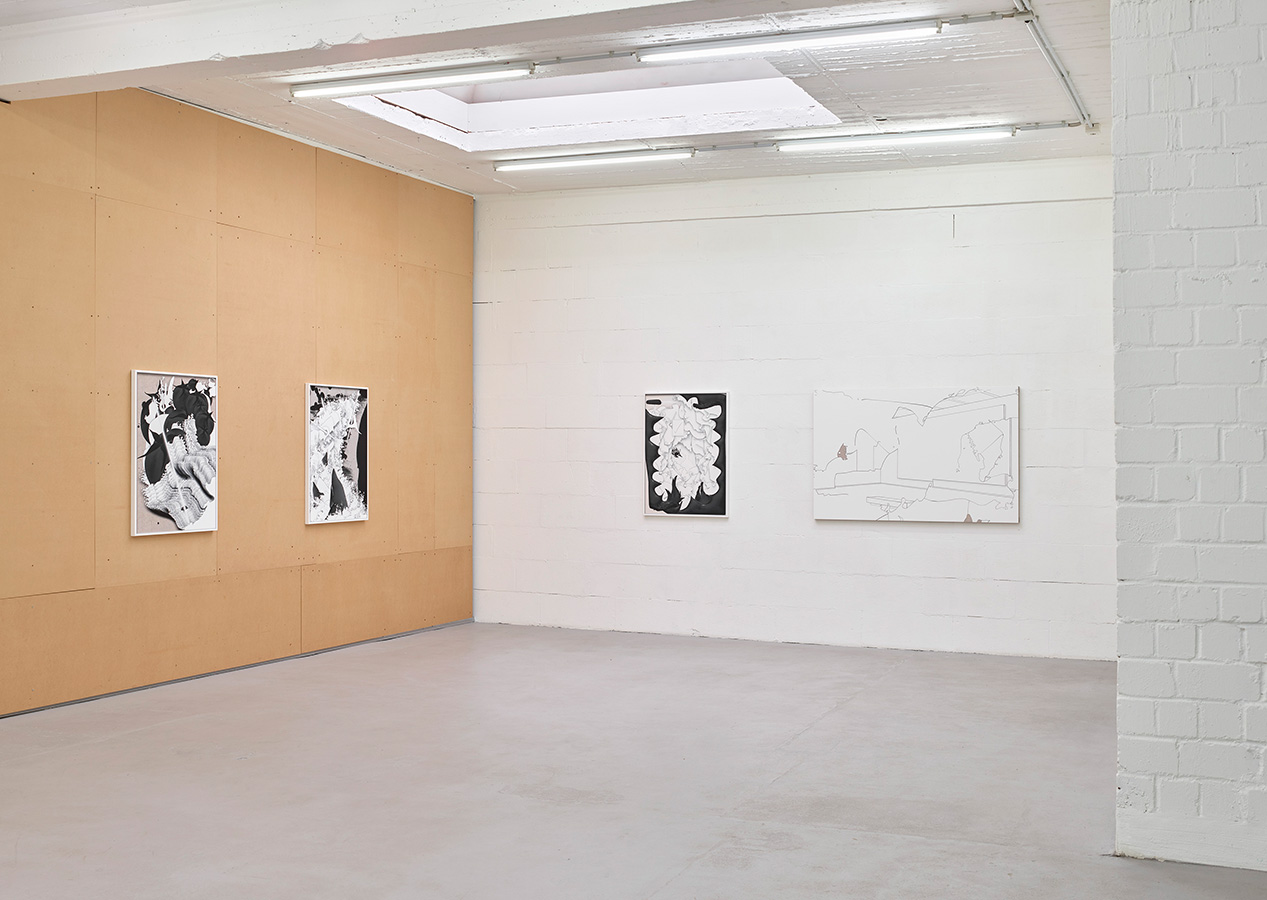 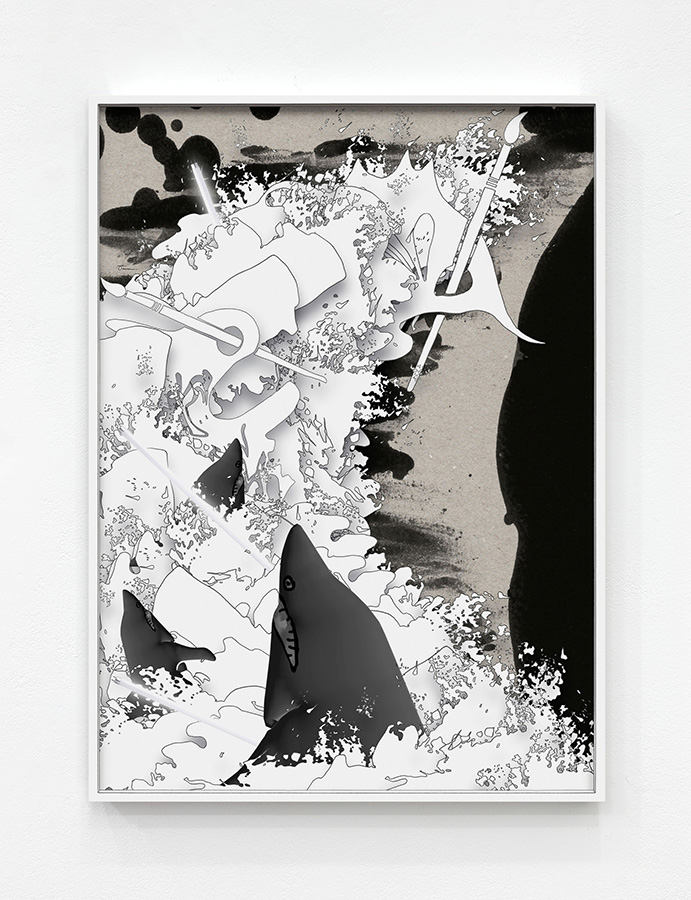 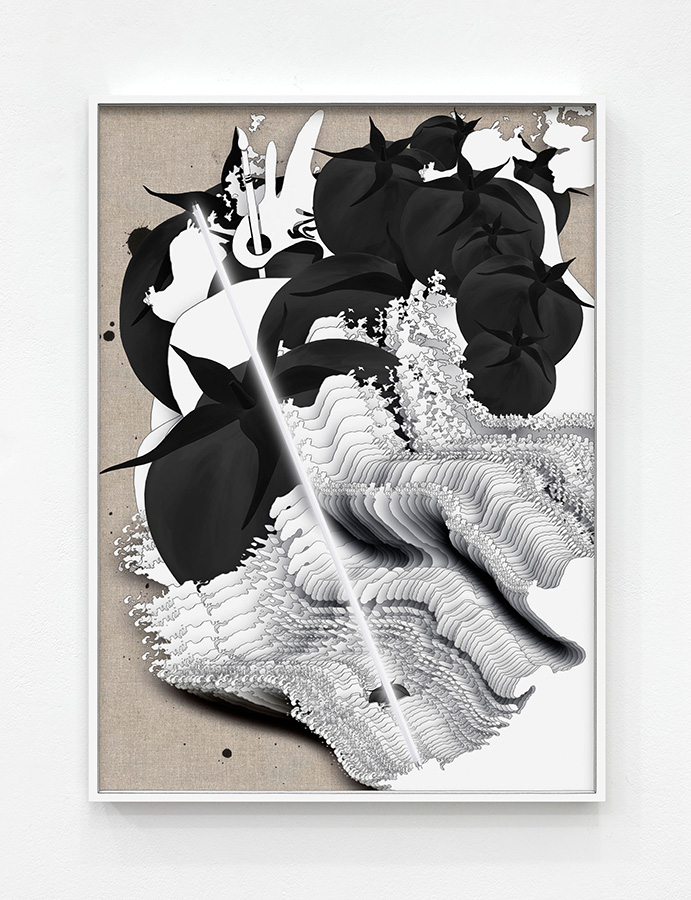 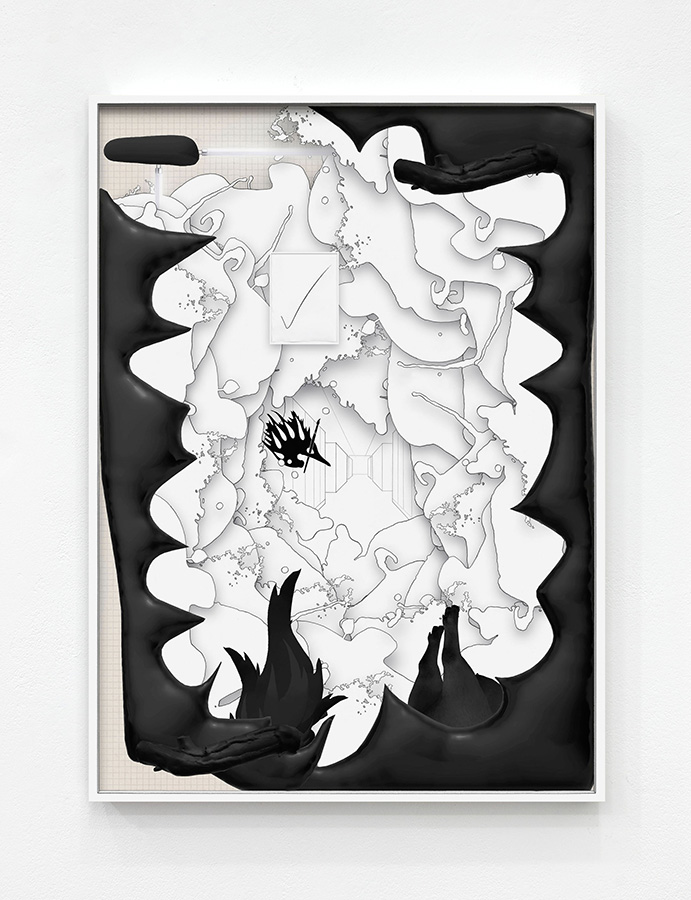 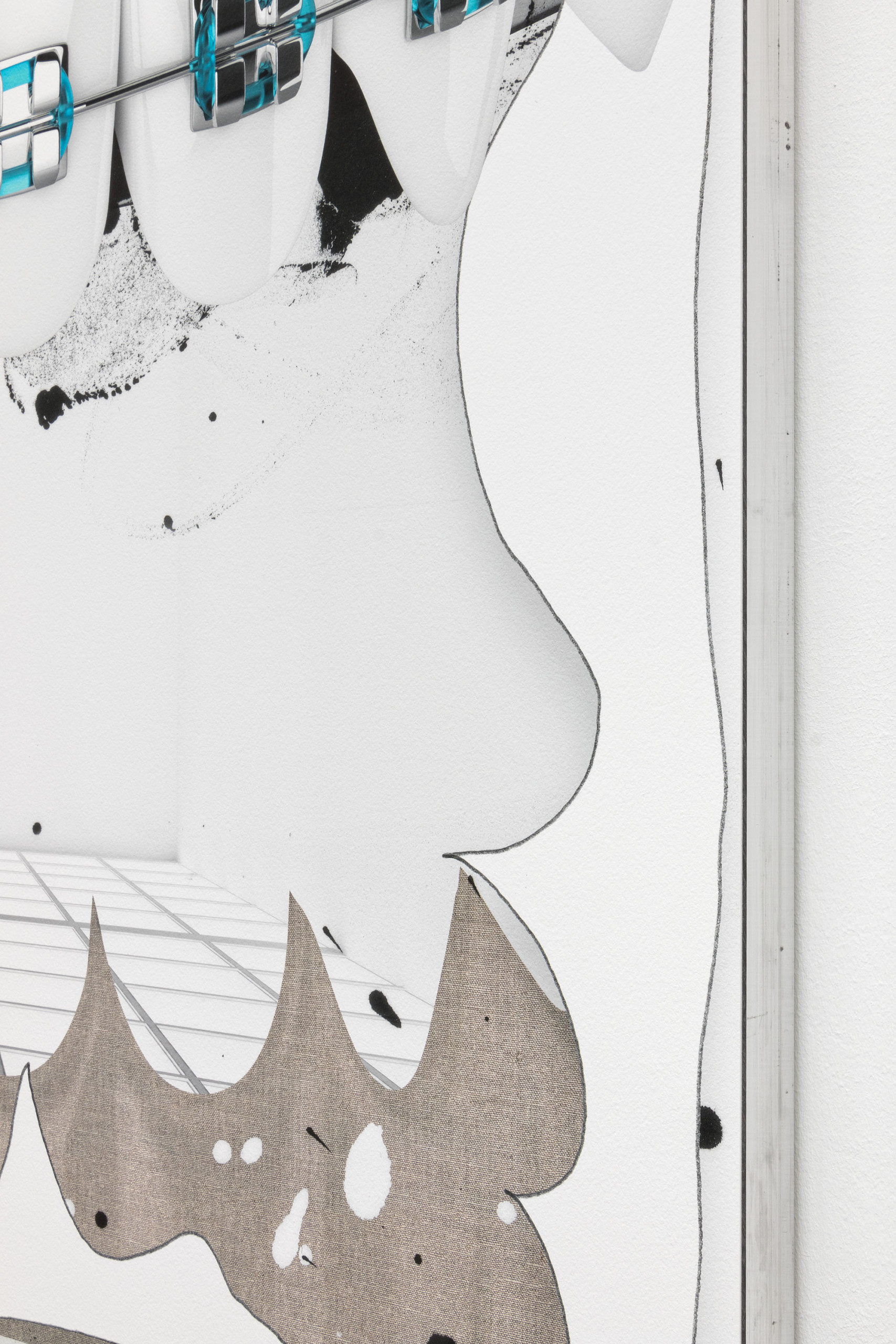 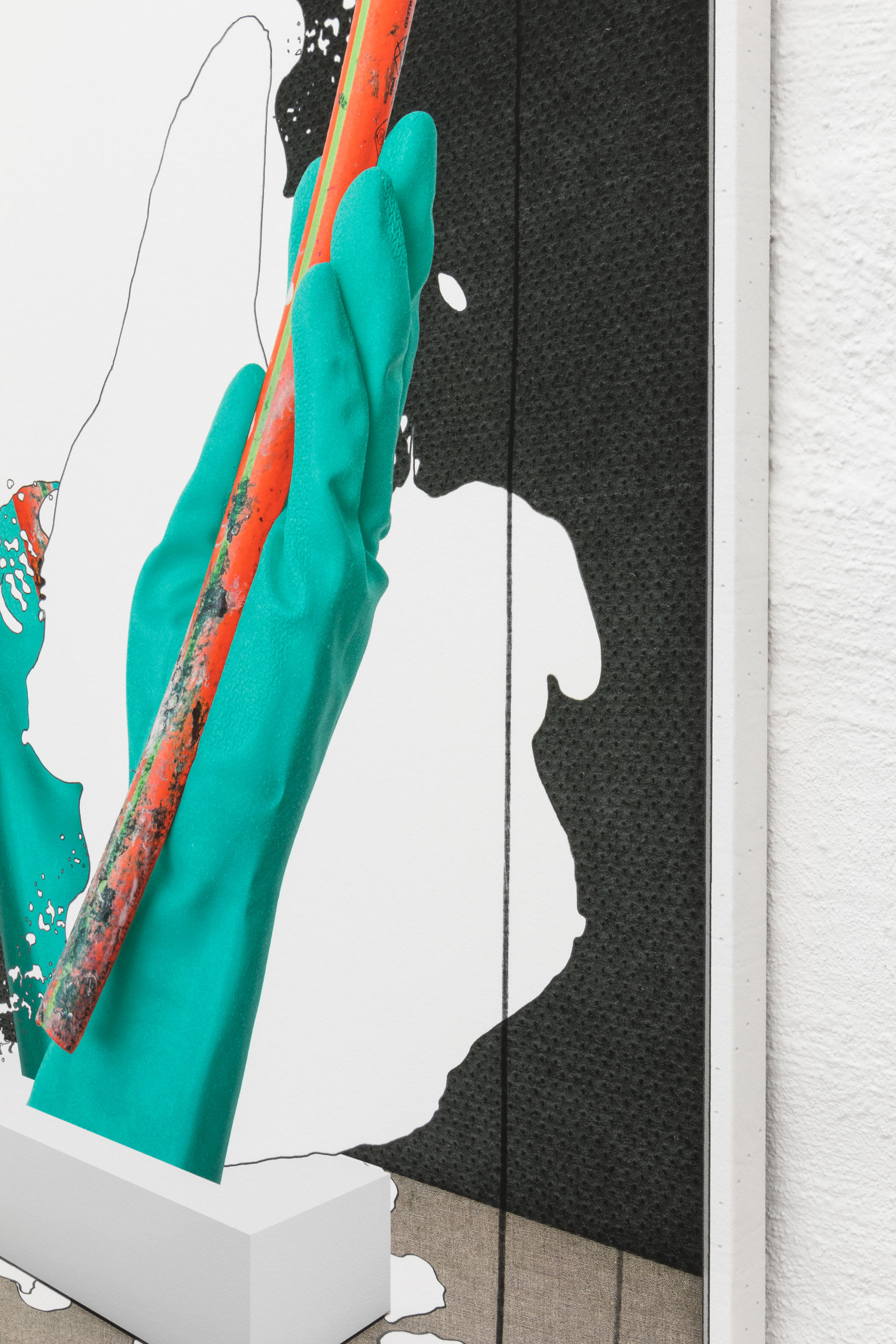 Johannes Bendzulla traces contemporary phenomena and the conditions of artistic, mostly digital image production, as well as considering the expectations that are placed on products of the “creative industry”—in the broadest sense—with regard to authorship and authenticity. In his work process, Bendzulla often reacts to moments where, as part of a commercialized appropriation, that which is supposedly freethinking is transformed into a standardized platitude.

The exhibition feeling again gathers together visual set pieces that aim to evoke the spirit of artistic work anew: depictions of empty exhibition spaces together with fluorescent lighting, canvas material, and painted and drawn elements, which, in their combination as a digital collage, seek to exude the spirit of individual creativity. Another recurring motif is the icon of the artist’s paint palette with a paintbrush that is used in classic computer programs such as Paint. Due to the distortions, reminiscent of tribal designs, the icon can only be recognized by its paintbrush, while in The Jury it could be also identified as a creature’s face. In most of the works, one encounters abstract, monochrome color fields that are created by tracing and then scanning splotches of paint. As an integral element of a now outdated advertising aesthetic, the color splash technique as such aims to convey a dynamic artistic message: this is where work took place, where the making and creating happened. In the act of seemingly endlessly copying these gestures, which always remain the same, Bendzulla staggers the splashes to form abstract structures in The Pest, The hand that feeds, and The Jury, which, on closer inspection, each consist of a single form, while tomatoes and sharks romp between them. In keeping with the idea of working efficiently, Bendzulla uses 3D and rendering programs for modeling the sculptural bodies and simple shadowing, thus giving the works the minimum pictorial depth necessary to satisfy initial scrutiny.

As in his previous series, Bendzulla negotiates the interface of digital, photographic, and “real” source materials, as well as their seamless blending together. This is occasionally expressed in the semblance of physical authenticity. The printed fibers of the canvas material or chipboard acquire a trompe l’oeil-style character through the use of handmade paper; with pencil markings and streaks of color, the structures of the scanned and enlarged drawings also seem so astonishingly real that the works always remain at the limits of the illusory.

On the one hand, feeling again can be interpreted literally, as if the works, contrary to the printed surface, indeed intend to convey a tactile feeling—or at least appear as if they do. The culmination of this carefully maintained “pretense” can be found by inspecting the edges of the images, which give the impression that the works are actually stretched across a frame. It is believable enough to satisfy an initial impression, which is frequently a common mode of viewing a work. The gaze does not amble, it only notices, perceiving the ups and downs that are enough to create the impression of realistic imitation.

On the other hand, the title could in fact be intended to express an overload of that which cannot be immediately understood, which cannot be filtered by one’s own gaze. Something that persists and can withstand the interchangeability of an anonymous mass of images seems almost unfamiliar and unsettling today. For what is perceived as “new” in the course of digitalization and the perpetual repetition caused by the constant circulation of images is ultimately a euphemism for that which seems to be working well at that precise moment; emotion of any kind is therefore hardly necessary.