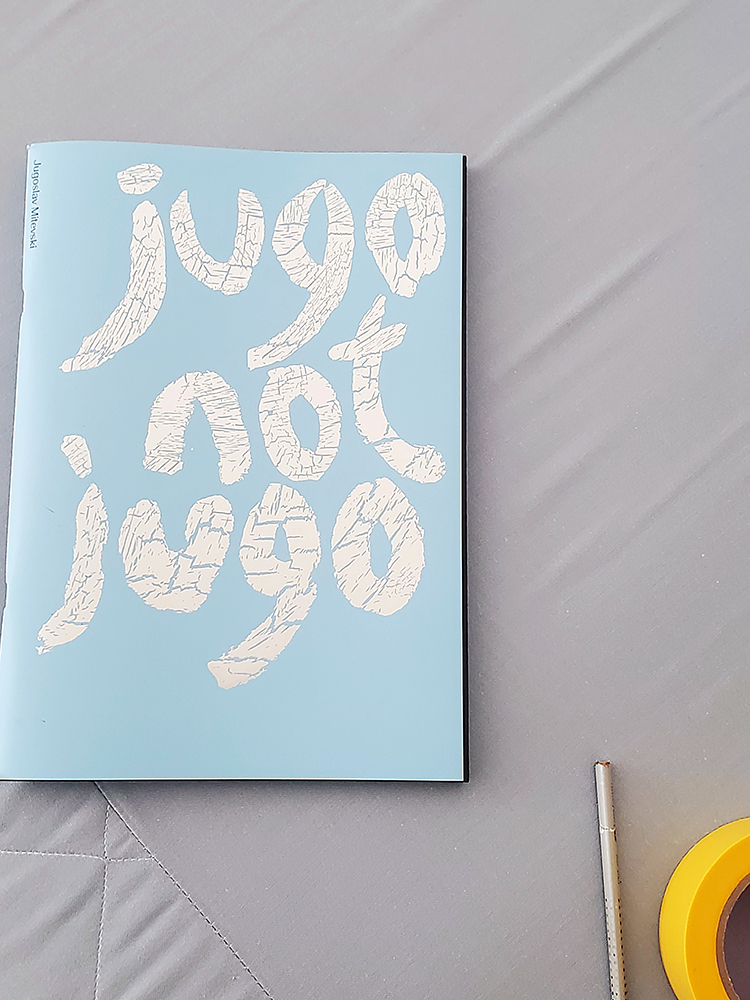 ghost not ghost and blue

Jugoslav Mitevski produces pictures that one would initially classify as non-representational paintings. In any case, there are no specific objects depicted in his paintings. They themselves are objects with a physical and spatial extent and presence.

However, Mitevski did not find them, but he makes such images or objects in his studio. He begins by pouring liquid concrete into a mold. With various additives, he influences the properties of the concrete mass and changes its consistency as it dries, creating irregularities and cracks. Or, as in this case, he places a fiberglass mat inside the formwork, retrieving it after the concrete has hardened with great physical effort using tools such as a hammer and chisel. Mitevski has filled the resulting broken-out areas with epoxy resin, creating an irregular shape that has a smoother surface than the concrete.

Mitevski also often pours the concrete into assembled parts of various Styrofoam packaging of technical devices or other consumer goods. The resulting colorfully painted reliefs and free-standing objects sometimes resemble furniture or shelves, but they have no practical function. The efficiency-oriented design of industrial forms and packaging is, as it were, Mitevski’s source material, which elicits an unexpected aesthetic potential. Having established certain parameters, he leaves much to a physical process that he observes and only occasionally intervenes in in a targeted manner. The effects of this process, in which the states of the material change time and again, are clearly perceptible in the result. But all the effects of physical force, even if they are based on the artist’s own physical activity, are not direct traces of his gestures. Expressivity and subjectivity do not appear anywhere; Mitevski’s approach is deliberately “counterintuitive,” as he puts it.

Therefore, Mitevski’s approach is thus not a direct “implementation” of ideas, but rather he sets certain conditions whose parameters can hardly be ascertained in the result—in contrast to a strictly rationalist conceptualism. Thus he makes meticulous mathematical calculations, entered in tables, which concern, for example, the mixing ratios of the concrete he used, but which are in no way visually nor otherwise comprehensible to the viewer.

These are the ways he conceives setting something in motion. However, as the one who creates, he always retreats to a kind of indirect presence, comparable to a conductor or director. Only it is not human actors that he directs, but formal and physical processes. He lets these run until the “actors” move in a direction he wants to correct, which can also mean that the events take place, unsurprisingly, along expected lines.

Thus Mitevski’s work can hardly be classified in conventional categories such as painting or sculpture. For him, these categories are ultimately only molds, into which he adds some “information” that in the end condenses quite differently than would have been expected at the beginning.